When you think about a flock of backyard poultry, what kind of chicken comes to mind? Do you dream of Delawares, plead for a Plymouth Rock or wish for a Wyandotte? Here we will describe the most popular and commonly found chicken breeds for California backyard owners so you can better identify which bird will best suit your needs.

What to Look For

First, let’s go over a few defining features that will help with identification. Most notably, the “plumage” (feathers) of many breeds will come in a variety of colors, making identification strictly based on color difficult. When comparing two similarly colored birds consider factors such as size, comb pattern and temperament to assist in narrowing down breeds. If you’re fortunate enough to know the hen’s egg color and general size, that will also come in handy.

When you envision a flock of chickens, the colors that come to mind may be brown, a light tan, maybe white and a black and white speckled hen. That speckled hen more than likely is the Barred Rock. 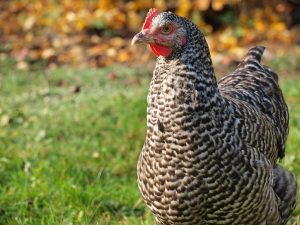 The Barred Plymouth Rock (BPR) is one of the most popular breeds for backyard owners in the U.S. They are large dual-purpose birds, with roosters averaging around 10 lbs. The entire breed is referred to as the Plymouth Rock and is sometimes mis-identified as only the “barred” variation, though the breed comes in a variety of colors. Their most common black and white speckled coloration, referred to as “Barred” gets them confused with Hollands, Marans and Dominiques. However, the Plymouth Rock can also come in white, silver-penciled, columbian, partridge, buff and blue. They have a single comb, meaning one row of 5 evenly spaced points. Plymouth rocks are a welcome addition to a flock as they are often docile and able to adapt to both coops and free-range environments. BPRs are cold hardy, though cooling may be necessary in higher temperatures.

Is it a Barred Plymouth Rock, Dominique, Maran or Holland?

The Dominique chicken breed was used to develop the Plymouth Rock, so understandably there are many similarities between the two breeds. But they can be told apart with some immediate visual differences. First, the comb of the Dominique will have a distinguishable “rose” shape with a spike towards the back compared to the BPR, which has a straight comb. This type of comb actually makes it more resistant to frostbite! Second, when comparing bird size, the BPR will be slightly larger than the Dominique, and will lay larger eggs. Lastly, the barred-like coloration is also a technically different “cuckoo” pattern, with a less distinct or uneven black and white pattern than the sharp, clean pattern of barred birds.

Speaking of the cuckoo pattern, Cuckoo Marans are frequently mistaken for Barred Plymouth Rocks but lay a dark brown egg. Marans are also typically less docile than a BPR, so be cautious when introducing them to a flock.

Finally, Barred Hollands are actually an endangered breed, with their white variation nearly extinct. If you do find one, their eggs are white instead of the BPR’s brown egg and the bird itself will be slightly smaller than the mature BPR. 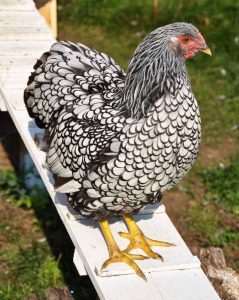 A silver laced wyandotte standing on a coop ramp. Photo by thefrugalchicken.com.

Wyandottes are becoming popular thanks to their spectacular silver or gold “Laced” color variation, which is white or brown with black outlining each feather. This medium-sized dual-purpose breed is an excellent layer and will be content with a coop or free-range habitat. They are also cold hardy. Their temperament is often docile, so another welcome addition to a flock. Their rose comb makes them distinguishable from Brahmas, another popular medium-sized breed with many similar color variations. Color variations include buff, black, blue, black, white, silver penciled, buff columbian, and partridge. Breeders today are still creating new variations, including in the smaller “bantam” variety. 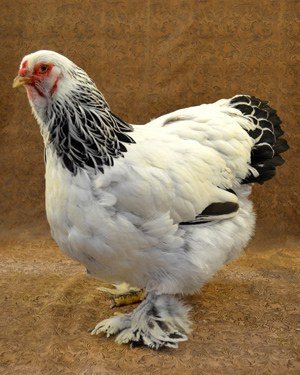 A black and white brahma chicken. Photo by The Livestock Conservancy.

Brahmas are a large-sized breed with good dual-purpose laying and meat capacity, though they were originally bred to be meat birds. They share many colorations with Wyandottes and can be as big as a Jersey Giant, so keep an eye out for the Brahma’s pea comb and feathered feet, which will help quickly distinguish them from other breeds. The pea comb looks like 3 low, short, fused rows with the middle row being the tallest. Combs like this typically indicate a cold-hardy breed, to which the Brahma is no exception. Hens are known as superior winter layers, though similarly to the Jersey Giants, their great size can make broody hens a concern for egg crushing. Their size and cold hardiness makes them ideal for colder climates. Their docile nature allows them to be a welcome addition to any flock. 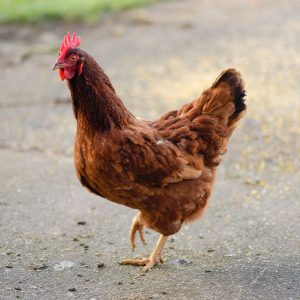 Rhode Island Reds are an excellent dual-purpose breed and are among the best layers for their large size. Mature birds come in a variety of mahogany red. Hens range from being docile to curious, but their Roosters can be more aggressive than other breeds. The hens are also known for not being particularly broody, so if you’re hoping to have natural hatching be sure to set up an incubator in case eggs are abandoned. They are a hardy breed that can adapt to hot or cold climates but should be provided accommodations in extreme conditions. Their curious nature makes them more suitable for foraging, but they can thrive regardless of coop set-up. 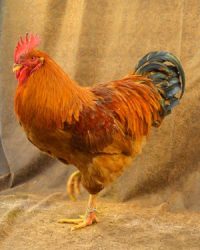 A rust brown New Hampshire chicken with a dark tail. Photo by The Livestock Conservancy.

New Hampshire or New Hampshire Reds are a smaller breed with a solid red/brown color and typically black tail feather tips. They have a single comb and are reported to have a more “triangular shape” than Rhode Island Reds according to the Livestock Conservancy. Hens are excellent layers and are known to go broody. Their temperament varies, but they tend to be among the more curious hens and can be more food-motivated than other breeds, so practice caution when introducing to a multi-breed flock. They also can adapt to coop life or a free-range environment.

The Orpington is a large  dual-purpose breed with hens that excel as layers and setters. Their most popular color variation is “Buff” (light gold), but they also come in black, white, blue and “splash”. Originally bred to be a fast-growing, practical breed for meat and egg production, they still perform well in today’s small flocks. As mentioned, hens tend to get broody and can be used as setters for other bird’s fertile eggs. Their especially docile temperament can make them more prone to bullying than other breeds, so use caution if you have a variety of breeds in your flock. They also don’t mind a coop or free-range habitat and are cold hardy. 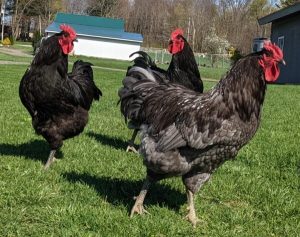 Jersey Giants are sometimes sought after purely for their stunning size. According to The Livestock Conservancy, they were originally bred with the idea to replace turkeys as a meat bird. Jersey Giants come in black, blue, and white original color variations.  As the largest breed of chicken in the U.S. with roosters averaging around 13 lbs, they take an unusually large volume of resources to maintain. This breed is not for the economically minded! Hens can be surprisingly docile and vary in broodiness, but be sure to monitor setting hens as their sheer weight sometimes crushes their eggs. They are also a very cold hardy breed and will need cooling accommodations in warmer temperatures. They need a larger grazing space, nest boxes, and roosting bar space than most breeds. 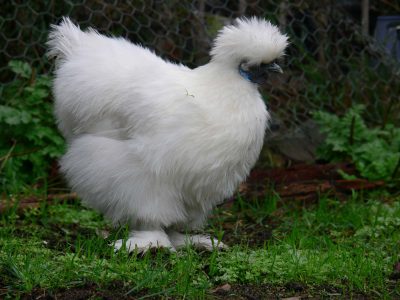 Silkies have a unique feather structure making it easily recognizable. A small breed only available as bantams in the U.S., their soft “silk-like” plumage gives them a fluffy appearance. The breed standard colors for Silkies are white, black, blue, buff, partridge and splash. Other distinguishable features are their black skin and bones, blue earlobes and 5 toes instead of the usual 4 for most breeds. Typically kept as an ornamental breed, they are not efficient layers, but hens can get broody and set on fertile eggs from another hen. They are known to be docile, so they are also a welcome addition to a flock. 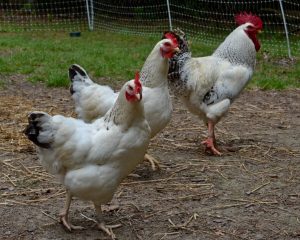 Delaware chickens are a medium-sized dual-purposed breed. They were originally bred primarily as meat birds. This breed can be hard to find, but they are becoming more popular as their rapid growth makes them efficient to raise. The only coloration available for this breed is solid white with a speckled black collar around the neck and black tail tips. They sport a prominent single comb with 5 points. Hens may not be the best setters, so have an incubator ready if you’re considering chicks. A hardy breed, they can live in coops or free-range habitats but get curious. Delawares are docile, so integrating in a flock should be pain-free.

While this is not an exhaustive list of available breeds for backyard chicken owners, it does cover some of the most common options. For more breeds to consider for your flock, visit the reference links below or pick up a catalogue at your local feed store.

This article was written by Theresa Valdez at the UC Davis School of Veterinary Medicine.